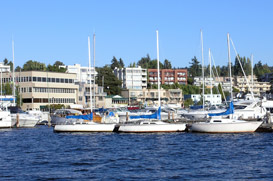 Just across Lake Washington from Seattle is the city of Kirkland, a city of about 80,000 people. Founded in 1888 by a British Steel magnate named Peter Kirk and the owner of the Seattle Post-Intelligencer Leigh Hunt, it’s come a long way since it was founded as a steel town. Today it’s an affluent bedroom community for Seattle and Redmond, and a pedestrian and bike-friendly place to live.

With their annexation of three neighborhoods in 2011, Kirkland has plenty of real estate available with prices ranging between $70,000 for condos to $660,000 for luxury homes. Neighborhoods like Finn Hill and Bridle Trails have plenty of green spaces while Market, Norkirk, and Moss Bay are perfect for those who want a more urban feel.

The main employers are Microsoft in Redmond, and Google in both Redmond and Kirkland. The city is in the Lake Washington School District, and there are institutions of higher learning in town as well. Evergreen hospital is in the Totem Lake neighborhood, and Kirkland keeps a healthy lifestyle.

The city takes care of Water and Sewer service, and most of its streets are meant to accommodate bicycle traffic. Wherever you go you’ll see at least one statue or fountain in town, and many more are erected every year by artists.

What people can do in Kirkland

Two state parks, St. Edward and Bridle Trails are on the northern and southern edges of town respectively. St. Edward State Park was once a seminary and is full of history, while Bridle Trails State Park is an equestrian park with great scenery. The city has 8 parks of its own, most of them on the lake shore with nice beaches.

Although the art scene has diminished in recent years there are still a few galleries in the city, and the Kirkland Art Center has many exhibitions and classes year-round. There are plenty of shopping options from the many specialty shops in Market, to Totem Lake mall, to all the major departments stores in nearby Seattle. There are also two farmers markets during the warmer months.

Kirkland is also the home of the Little League Junior Softball World Series in August, and other events like the Seattle International Film Festival in early June, Kirkland Summerfest in August, and many fine concerts at the Kirkland Performance Center all year.

Just across the lake in Seattle there’s plenty to do as well, from the major attractions like the Space Needle and Pike Place, to Woodland Park Zoo and the Klondike Gold Rush National Historic Park. With the Cascades just a short distance from Kirkland, people love to go skiing in the winter.