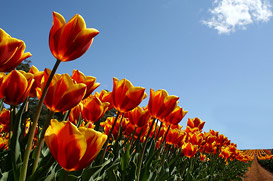 Between Seattle and Bellingham on the Skagit River is the city of Mount Vernon, Washington. Founded in 1889 as a logging community, and named after George Washington’s home, this town of 32,000 people is a great place to live with a mild climate comparable to parts of northern France.

The town’s main industry today is seeds, with 90% of America’s spinach seeds, and 55% of the world’s beet and cabbage seeds, and millions of tulips that grow in the Skagit area make this the tulip capital of the region.

There are plenty of houses for sale in Mount Vernon, with prices ranging between $60-380,000, one of the reasons that so many are choosing to move here. Despite its steady growth in recent decades, this town maintains a small-town feel that few can resist, and it’s a very safe place to live.

The main employers are the seed producing businesses, though in nearby Anacortes, General Chemical and the Tesoro oil refinery also employ hundreds of people from Mount Vernon. Mount Vernon has 12 parks you can enjoy, including Little Mountain Park on the southeast end of town, with its 1,110-foot elevation giving way to an incredible view of the mountains and the San Juan Islands to the west.

The town’s public schools are part of the Mount Vernon School District, and the city is home to Skagit Valley College. Just east of downtown is Skagit Valley Hospital, water and waste services are provided by the city, and there are plenty of churches.

Activities in and around Mount Vernon

In Mount Vernon, across the river in Burlington, and in Anacortes, there are plenty of shopping options, from the major shops in Mount Vernon, to Cascade Mall in Burlington and plenty of specialty shops downtown. The Skagit rRiver, Big Lake to the west and the nearby Pacific Ocean have great fishing and boating, and the Cascades are just to the west of town with great hiking in the mild summers, and skiing in the winter.

Three state parks are near the city, and the North Cascades National Park is only over an hour away. Downtown is going through a revival thanks to the city’s flood protection plans, and now has several art galleries, great restaurants, a farmer’s market in spring and summer, and a brand new Riverwalk.

There’s always plenty going on in the city year-round, from the Skagit Tulip Festival in April, to Brewfest and the Skagit County Fair in August. Bellingham is only 25 miles away, and several big cities such as Seattle, Vancouver and Victoria are only a few hours away by road, rail, or ferry.