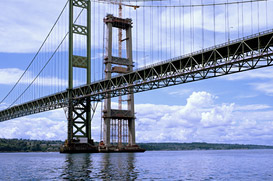 For those considering a move, Tacoma, Washington, is an excellent choice. This mid-sized port city of 200,000 enjoys a thriving industrial-driven economy, top-rated educational institutions, and access to the Pacific ocean.

Tacoma rings Commencement Bay, a deep-water port and major trading center which is part of Puget Sound. Many areas of Tacoma allow for very nice views of Mt. Rainier. Mt. Rainier National Park lies some 60 southeast of the city.

Naturally, to any parent considering a move, the state of education in a prospective city is of prime importance. Tacoma boasts a first-rate education system.

The majority of public schools are consolidated under the Tacoma Public Schools district, including five high schools, eleven middle schools, thirty-six elementary schools, an alternative high school, a math and science institute, and one school of the arts, Tacoma School of the Arts, which is a national model for innovative public education.

Tacoma’s port at Commencement Bay is a center for international trade, and much of its economy is focused on commerce and industry related to this.

Several international companies are based in Tacoma, taking advantage of its deep-water port, including Simpson, a lumber company, the food companies Brown and Hadley, and Roman Meal, as well as the staffing company True Blue. Other employers include U.S. Oil and Refining, the Tacoma Mall, and Mars, Incorporated.

Tacoma is very much a driving city, with roads organized along a grid in order to facilitate the flow of automobile traffic. But public transportation is available, including light rail, commuter rail, ferries, and busses. Cultural attractions include the Museum of Glass, America’s Car Museum, Tacoma Art Museum, Washington State History Museum, Broadway Center for the Performing Arts, Shakespeare in the Parking Lot, Tacoma Film Festival, and a downtown farmer‘s market.

Offering a thriving industrial economy, excellent schools, and great healthcare, Tacoma, WA, is an ideal place to purchase a home and settle down.